You are here: Home » Pupil's Achievements » Rob Allen Finishes 4th in the 2011 County Order of Merit

Rob Allen Finishes 4th in the 2011 County Order of Merit 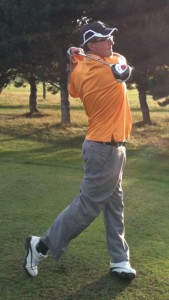 Rob finished a fantastic 4th position in the county gross order of merit for 2011. Rob played in 4 out of the 7 qualifying events and accumulated a well deserved 37 points! The top 10 positions in both Stroke Play rounds of each event were awarded points on the following scale 12,10,8,7,6,5,4,3,2,1. Meaning Rob had multiple top ten finishes on his way to achieving is fantastic fourth place total, beating some of the best scratch player in the county on the way. Rob was actually lying second going into the last event and narrowly got beaten. This is a career best finish for Rob and it is well deserved after completing a structured and challenging winter practice regime.

Rob and I started working together in the November of 2009, he had aspirations of being a scratch player. Rob had gotten down to a 6 handicap around Wareham golf club but couldn’t seem to make the next jump down to category one golf, in fact he was on the brink of going back up to 7 which he said wasnt an option. After sitting down for a consultation it was clear what we needed to do, we put a structured practice regime in place and started work.

After Robs latest cut he is now playing off of 3.9, a reduction of 2.5! For those who are unfamiliar with category one golf, this equates to shooting in excess of 15 under his handicap this season, so a lot of low scores!

His other achievements this year include winning two club medals gross and coming third in the Club Championship just losing in a play off at his home course The Dorset Golf & Country Club.  All in all a fantastic season with great prospects and potential for next year, watch this space!