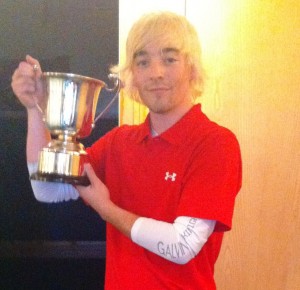 Dominic Narramore successfully defended his Bodger Trophy title for the second year in a row shooting a Net 75. The Bodger Trophy is a competition reserved for The Dorset Golf & Country Clubs First and Second Team players only. The Bodger Trophy is the only individual competition played off the back (Blue) tee’s which are normally reserved for Professionals and category one players only. The course off the Blues measures in at a staggering 7027 yards which is one of the longest in the County. The conditions were very tough with strong gusty wind and showers, the Standard Scratch for the day went up four strokes to 77 meaning Dominic got a 0.4 reduction in handicap, the only player to do so!

Dominic’s best hole was the 506yrd Par 5 second, into wind he hit a monster drive followed by a superbly struck 3 iron into only 15 feet, narrowly missing the eagle he tapped in for an easy birdie. This set the tone for the day!

Dominic’s progress this year has been fantastic, he’s worked hard on sharpening up his ball striking and improving his putting stroke, in particular. These aspects are really starting to come together and Dominic is starting to reap the rewards. Winter is fast approaching, which is the time to practice hard and make the bigger technique changes.

Dominic is ready to put the time in with me this winter, meaning next year he has the potential to come out firing!

2012 looks like it has the makings to be his best season yet, superb work Dom!