You are here: Home » Pupil's Achievements » Mustang Sally on Fire! 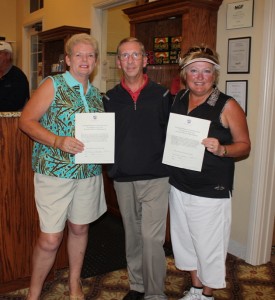 Sally Bruce shot a Gross 80 with her partner to win a Years Platinum Membership around her local course Providence in Davenport Florida. This is the second year in a row that Sally has won their prestigious competition and it is well deserved. This year however didn’t come easy, Sally had to work really hard as she was struggling for form leading up to the competition. Fortunately for the week leading to the competition I was staying with them at their home in Florida which gave me the opportunity to work with her every day to build confidence and simplify her swing and thoughts. It all worked and better than expected, with Sally commenting to me that ” You wouldn’t believe how far I hit the ball. Little L, swoosh and extend – worked every time and straight too”. I was over the moon, not so much that she won more that she enjoyed the game, hit it well and was extremely confident. Sally is a new student to me, only starting with me in July 2011. She has come on leaps and bounds and deserves to with multiple successes already! Sally is one of the most enthusiastic and focused people I have had the pleasure of working with, she knows what she wants and wont stop until she achieves it!

Great work Sally, were well on the way to achieving your goals!