You are here: Home » Steve's Tip of the Week » Monitor your Self Talk to Increase your Confidence

Monitor your Self Talk to Increase your Confidence 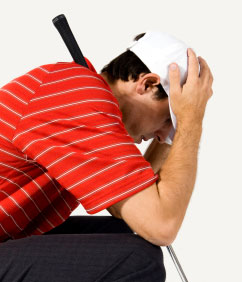 All of us have self talk, that’s the little voice inside our head that makes comments on how we should play or passes judgements on what we’ve done. We can say it out loud or in our head but it is all self talk if it’s directed at ourselves. The key is to control your self talk in order to control your confidence. We want to replace any  negative comments with positive or neutral comments. Studies that have looked at the effect of positive, negative, and neutral self-talk on performance indicate that participants in the positive self-talk group outperformed those in the negative and neutral self-talk groups. Additionally, researchers have also found negative self-talk to be linked with diminished performance.

“I played so bad last time I played here.”
“I can’t believe I missed that putt.”

Not ‘letting go’ of mistakes or poor performances takes thoughts and focus away from the present.

A similar situation occurs when athletes worry about what may happen
(‘I may hit that shot into the bunker’).
All players have control over is right now; that is where thoughts need to be.

Statements such as these are a waste of mental energy. Not only are they out of a player’s control, but they also distract thoughts from where they should be.

So get a note book and write down any negative self talk you become aware of then re-phrase any negative self talk in a positive light as I’ve shown above. Then any time you say those phases remember how you’ve rephrased them and say them after to reinforce the positive thoughts before hitting your golf shot. Before long the negative will change to positive and your confidence will improve!

I look forward to seeing your note book if you need any help rephrasing.

2 Responses to Monitor your Self Talk to Increase your Confidence