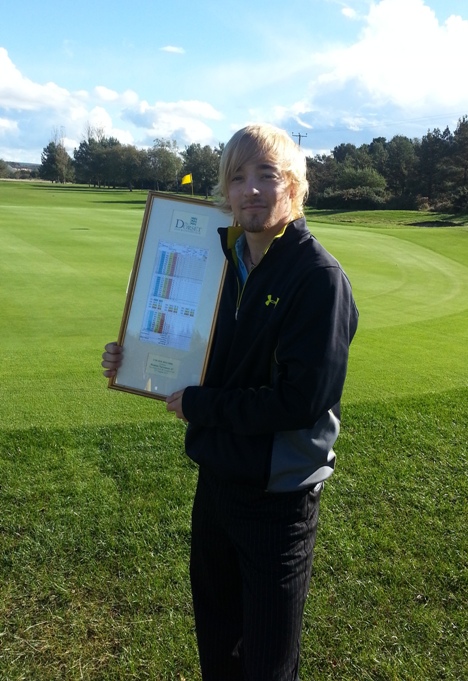 This year has seen Dominic put together his best season ever! Dominic has won over 8 competitions! The main ones being Presidents Day, Captains Day, Young Golfers Benefit Fund Shield, August Medal, September Medal, October Medal which was (The champion of champions medal).

His handicap has dropped from 10 (this time last year) to 4. An amazing achievement!

But it doesn’t stop there, in the process Dominic set a new course record at The Dorset Golf & Country Club.

He recorded 7 birdies, 10 pars and a double bogey to shoot 67, smashing the old course record by two shots! After the round Dominic told me

“It was touch and go after my double bogey down the par 3 15th but I pulled myself together and finished with two birdies down the par 5 16th and the par 4 18th to set the record”.

After reaching and exceeding the goals we had set together at the start of the year, Dominic and I have reviewed his progress and set him his new targets for the new 2013 season.

“My aim now for next year is to turn professional and play some competitive golf next season. I feel that right now the sky is really the limit!”

Dominic and I have been working together for around 3 years now, he started with me as a 21 handicap golfer. He has not only worked with me on a one on one basis he also attended both seminars I put on last year with Dr Karl Morris (Europe’s Number 1 Mind Coach) and Gary Smith (The UK’s Number 1 Short Game Coach). Clearly this was a recipe for success. Dominic’s story really does prove that with hard work, a great attitude and the right support you really can achieve your dreams.

I said it last year, and I’ll say it again. Watch this space!

With the huge support from his Dad, Mark Narramore and my self, who knows what he will achieve in the years to come!