You are here: Home » Steve's Tip of the Week » Get the mind and the body working together!

Get the mind and the body working together! 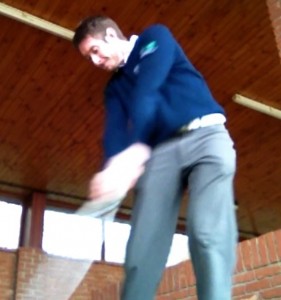 The hardest thing in golf is stopping the self critical process, this process can and does destroy golfers sending them down a slippery road. The brain is constantly interfering with critique in order to succeed at the given task.

When it comes to changing bodily movement patterns this can actually be more of a hindrance than a help especially in a playing environment!

The simple reason is that the analytical side of the brain (left hemisphere) doesn’t actually control movement. Think about the brain as actually two brains. One for thinking (analysing) and one for doing (movement). Now I’m not saying that one side doesn’t influence the other or shouldn’t influence the other, however, as the action is being performed the right side of the brain should be allowed to be fully in control, un-interrupted.
Due to our nature this is immensely hard to do, what we need to achieve is a distraction for the left side of the brain . A distraction to stop it interfering whilst at the same time keeping it involved in the task some how. 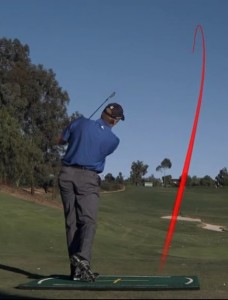 To start training this involvement we must place our focus and attention on the strike of the ball. In fact focusing to the extent that during this practice I would like you to say hit the moment that you feel contact with the ball has been made. Now I don’t want this to be a prediction, we can all guess roughly where in the golf swing we strike the ball but this is just more thinking……
You will never achieve the task of saying hit at the exact moment of contact as the sensation and feedback will take time to travel up the club and be recognised in the brain. The idea is we are as quick as we can be, for this we must be focused completely on the strike. After the strike the attention must move to the ball. Watch the ball flight intently until the exact moment the ball lands and which point I want you to say the word bounce.

These two areas of focus are so important. The first stops your brain interfering with your swing as the focus and attention will be only on the strike with no time to think of anything else!

The second focus of the ball flight will stop the self critical process of what you did wrong and what you will interfere with on the next swing. So you can see a simple tip at heart, but with deep and powerful science behind it to back it up.