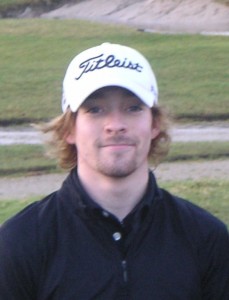 The Bodger Trophy is played for once a year by the club best most competitive players. Entry for the competition is reserved for the first and second men’s teams only and is played off the back blue tee’s measuring at over 7000 yards.

Being arguably the longest player at the club, Dominic loves the challenge of the blue tees, finding the extra distance no problem! It was an incredibly windy and wet day with the standard scratch raising so high it became non qualifying! However fighting the elements Dominic still came out on top, not just defending his title once but twice! This is the third year in a row Dom has won the Bodger Trophy but unfortunately it will be the last time, Dominic is set turn lose his amateur status half way through the season this year, turning professional.

It’s been a real pleasure working with Dom, taking him from a junior golfer of 21 handicap to a truly professional player!

Great work Dom, I’m excited to see what happens next!

One Response to Dominic Defends again!