You are here: Home » Steve's Tip of the Week » Just pop it out the bunker

Just pop it out the bunker 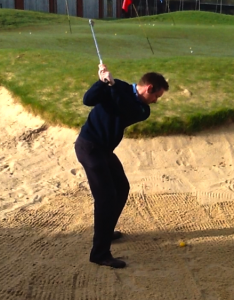 The key to hitting great bunker shots is not trying to hit it at really. Bunkers require the same finesse and touch as chipping and pitching but so many people try to hit bunker shots too hard. The main swing thoughts I teach for hitting great bunker shots are simple. Body turns back soft hands, body turns through soft hands. It really is that simple. Making a full length back swing is imperative to let the club do the work. The problem with a short swing is it causes the arms and hands to aggressively accelerate the club creating the wrong impact position. 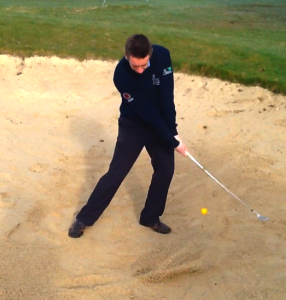 The reason is, to hit a successful shot you actually have to let the club head over take the hands but if the hands are accelerating hard this isn’t possible to achieve.

So for those that like to hit your bunkers shots more firmly try this.

I call it the pop bunker shot. The key always in the bunker is to take a full swing however the difference in this shot is what happens on the follow through. On the down swing just after you strike the ball stop the club as abruptly as you can, almost like your trying not to hit a tree in front of you with your club. The act of rapidly decelerating the hands will allow the club to overtake correctly striking the shot with the correct impact. 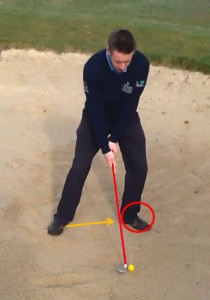 Now for those of you that may not know the set up for a bunker shot I will out line it quickly for you.

Wide stance (driver width)
Stand tall
Weight 70/30 on the leading foot (must remain there at all times!)
Straight feet and body aim
Ball position in line with the leading foot
Hands positioned in middle of the body with a vertical club shaft (so the shaft of the club has no forward lean).

Set up like this and hit the pop shot, the ball will come out every time!

One Response to Just pop it out the bunker