You are here: Home » Steve's Tip of the Week » Roll in more putts with the right pace!

Roll in more putts with the right pace!

There are loads of theories when it comes to how hard to hit a putt. Some people like to hit it dead weight others prefer to hit it firm! I will explain why neither are the right solution.

Lets tackle the dead weight idea first. I agree that when a putt is hit with the exact pace it needs to get it to the hole it can drop in from any side. In a world with a smooth round ball, smooth putting surface and no wind that would be the best.

However, the ball has dimples, the grass adds texture to the ground and the wind can influence the balls roll. So as the ball reaches the hole with dead weight, it can be knocked off line and will prove to be inconsistent.

Now here’s the other common option of hitting it ‘firm’. If you hit the putt too firm you will actually shrink the size of the hole! A delivery speed of 7 revolutions per second will only drop if you hit the hole within 1/4 of an inch from the dead centre of the hole. 4 revolutions per second only has a total target of 2 inches which is less than half the size of a standard cup! If the ball hits the hole outside of those stated measurements the ball won’t drop and will lip out! 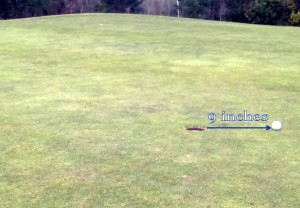 The correct pace on any green is to aim to hit the ball with 9 inches of extra pace.
The reason for this is a ball rolling with a ‘true’ role is rolling end over end. Its been proven that for the 6 inches of the balls journey it will actually cease to roll end over end and will wobble. This is due to the the dimples of the ball and the lie of the grass. So 9 inches of extra pace ensures that the ball will reach the hole with a true roll. The statistics on tour are that if a pro misses the hole with a putt the ball on average finishes between 9 – 12 inches past the hole observing this golden rule for holing more putts!

Due to the different speeds of greens, 9 inches past the hole relates to the ball rolling somewhere between 1 – 3 revolutions per second as it reaches the hole. This will give the hole an actual size of somewhere between 3.5 – 2.5 inches wide for the ball to actually drop in.

So hit the 9 inches past the hole to ensure a true roll at the hole and the biggest target possible for you to aim at!

2 Responses to Roll in more putts with the right pace!