You are here: Home » Steve's Tip of the Week » Use a wood to sharpen up your chipping

Use a wood to sharpen up your chipping 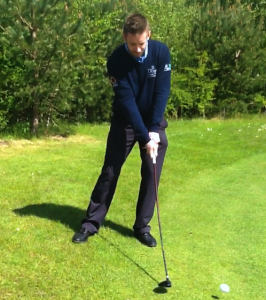 If that part of the club comes into contact with the ground first it will dig in stopping the club, resulting in a poor contact. The biggest cause of this I feel is in the way people try to approach a chip shot. I often see players hitting down too much on the ball.

The ideal way to strike a chip is to use the sole of the club, skidding it along the floor. The use of the clubs sole allows you to be less accurate with the strike (as no turf is taken) also striking the ball softer with more height as the true loft of the club is in use.

Here’s a great way to practice this, firstly position the ball forwards in line with the heel of your leading foot (as it should be anyway for a chip shot). This ball position allows the club to sweep the ball off the ground far easier.

The most important part of this drill though is the club that’s used to complete it, a fairway wood. The sole of a fairway wood is the largest of any club and will encourage the club to sweep the ball off the floor and not to hit down. The action will resemble much more of a hockey style swing than a downward blow almost like your pushing the ball at the target. First just practice this working on the strike not worry about distance control. Once you have master a nice strike try and hit some shots at a target just appreciating that the ball will do a lot more rolling than anything else. The ball when done correctly will just pop up initially of the ace then roll for the vast majority of the distance.

The key is not to think of this like a chip at all, approach this task as if you haven’t been given any instructions or preconseptions of what should happen and work out what sort of action (swing) will perform the task the best.

So practice your chipping motion with a wood positioning the ball forwards, then just play your wedges in the same way to see amazing results.