You are here: Home » Steve's Tip of the Week » Swing your Club like a Baseball Bat!

In the sporting world the golf swing has a brother which could actually be described almost like an identical twin. Would you believe the closest technique to golf is the Baseball swing!

The only noticable difference between the two sports is the spine angle used for the swing which is really linked to where the ball is hit from. To hit a baseball in mid air you have to be stood up straight and to hit a golf ball off the floor for golf you need to be bent over from the waist roughly between 30 – 45 Degree’s. When it comes to the arm swing and body movements they are practically identical!

This really highlighted one thing for me,  most golfers try to swing more up and down rather than more around their bodies. One of the big disadvantages of swinging up and down is that the longer clubs really wont be able to work to their full potential with the driver being the most dificult to use. If this sounds like you then there is a very simple solution swing the club like a baseball bat, around your body and not up and down!

To practice the correct swing position and movement the easiest thing to do is to make base ball practice swings.

Start by taking your normal stance and grip then lif the club up untill its level with your chest. Then swing the club around your body horizontally making sure the club head stays under shoulder height on the way back and through.  This movement should give you the right feeling to make a positive change in your swing which will result in more power and consistency. Once you get the feeling bend forward and make the same movement from a golf posture (bent from the waist).

So turn your Golf swing into a Baseball swing today to hit the ball better and further! 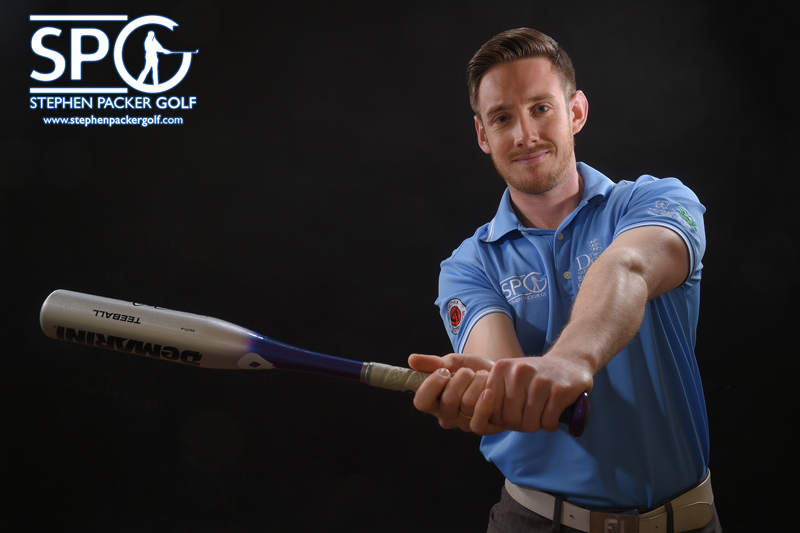