You are here: Home » The Stack & Tilt® Golf Swing 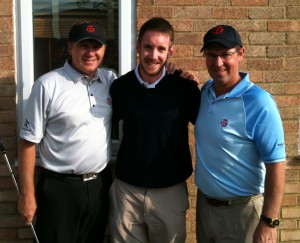 I have been fortunate enough to spend some time with arguably two of the worlds leading coaches in golf theory and coaching. From there I have continued my learning with them gaining my qualification as one of their Network Instructors. One of only a few in England!

The Stack & Tilt®  Golf swing was created and developed by Michael Bennett and Andy Plummer, here’s a little about them and the swing theory that’s redefining golf as we know it!

About Mike and Andy

Michael Bennett and Andy Plummer began learning about golf swing theory out of necessity. They were professional golfers who wanted to become outstanding players themselves, yet found it difficult to improve consistently. Subsequently they sought out many of the game’s best instructors, and at times their advice was just what they needed to improve. However there were also times of steep decline in their progress that made little to no sense given the amount of time they dedicated to practicing. This revealed to them that there was a lack of order in their understanding of the game of golf. Out of necessity they began organizing the swing based on advice received from noted teacher Mac O’grady, and based on principles laid out in Homer Kelley’s book “The Golfing Machine”. This process resulted in a system of understanding and organizing the game of golf that would later be referred to as the Stack & Tilt® system. The goal of the system is to present golf as a progressive set of workable challenges to the beginning players while also being broad enough to differentiate the smallest variations on the champion player.

Mike and Andy’s methods have been featured in numerous magazines including Golf Digest, Sports Illustrated and Golf World among others. They have appeared on the syndicated talk show The Charlie Rose Show and published a book titled “The Stack and Tilt® Swing”, which briefly cracked Amazons top 100 bestseller list.

Andy and Mike have now coached 9 different players who have won on the PGA Tour, including most recently Troy Matteson’s record setting victory at the Frys.Com Open in October of 2009, and Bill Lunde, the 2010 Turning Stone champion. Their methods have been used to win numerous tournaments on the Nationwide Tour as well as professional golf tournaments around the world. They also find improving the games of amateurs and beginners as gratifying as working with the best players in the world. They still teach players of all levels on a regular basis.

The Stack and Tilt® system of coaching is extremely clear and simple, it states you only need to achieve 3 things in order to play golf. A golfer must learn to hit the ground in the right place every time, create enough distance to get around a championship golf course and develop a repeatable ball flight pattern (so you know where the ball is going). These disciplines must be learnt in this order. Not what you were expecting huh? What about the grip, posture, stance and alignment that so many coaches teach as fundamentals?

The beginner golfer spends their limited time, money, and formative hours learning “fundamentals” that are not remotely standard among the game’s best players (no two players have the exact same grip, posture or alignments). This means that they are not fundamental at all.  So the game of golf is fundamentally misinterpreted.

The progression for learning golf is out of order because the fundamentals of the game have been so poorly defined.  Furthermore, the rules that govern how the ball flies are fundamentally misunderstood among most golfers. Thus, golfers have no understanding of the essential mechanics of the swing and do not understand how to correct their ball flight. Consequently, they default to bits of jargon, handed down dogma, or cliches that have little to no bearing on the problems that afflict them.

Golfers routinely leave the game out of frustration, lack of direction, or improvement that is too slow to justify. Golf needs to be presented as a workable challenge for the beginning player that adds sophistication as the players desire to improve increases or as the expert players situation necessities. What golfers need is a system!

The problem is that the word system in golf has been used with a negative connotation.

The insinuation is that everyone using the same system is given the same lesson or swings exactly the same way. This is short sighted and naive. In fact, any serious discipline has a system of measuring and standardizing procedures. Doctors learn to use systematic diagnosis to treat the ill, yet not all illnesses are the same. Patients are given systematic directions to follow to implement the doctors orders, yet the medicines are different. A surgeon has procedures they must allow for surgery, yet not all surgeries are the same. These systems are designed to make the procedure easier and more reliable. The same is true in golf.

The Stack & Tilt® swing model can be broken down into 10 words, weight forward, shoulder down, hands in, straight leg, arms straight, tuck hips. Could you describe a “traditional” golf swing that simply?

The Stack and Tilt® swing teaches and advocates many movements and positions that have been taught out of golf through misinterpretation and poor understanding of how a golf swing actually works. This means that over the years golf has become harder and harder to learn because the moves that are correct and could actually help you are deemed as wrong!

So come and speak to me today about how Stack & Tilt® can improve your game.